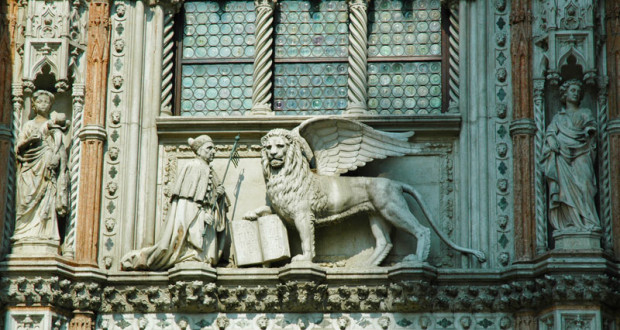 A bit of history

The barbarian invasions of the 5th and 6th centuries saw the people from the Roma towns of the Veneto and along the Mar Adriatico flee to yhe marshy islands of the venetian lagoon. In the 6th century the islands began to form a type of federation,with each community electing representetives to a central authority,although its leader were under the control of the Byzantine rulers in Ravenna.Byzantium’s hold over Italy weakened in the early 8th century and in 726 AD the people of Venezia elected their first doge, a type of magistrate, whose successor would lead the city for more than 1000 years. By the late of 10th century, Venezia had become an important trading city and a great power in the Mediterraneo,prospering out of the caos caused by the First Crusade launched in 1095.During the 12th century the city continued to profit and it not only kept most of treasures plundered from Costantinople,it also kept most of territories won during the crusade,consolidating a maritime might that made it the envy of the other powers.During much of the 13th and 14th centuries,the Venetians struggled for maritime supremacy,these events could not fail to adfversely affect Venezia,robbing its ports of much of their importance.But Venezia remained a formidable power. At home,the doges, the Signoria and much-feared judicial Cosiglio dei Dieci,which was responsible for internal security, ruled with an iron fist.They headed up a complex system of councils and governament committees, the parliament equivalent of which was tha Maggior Consiglio.The doge, an elected duke,was the figurehead of state and generally the most powerful individual in governament. A decree of 1297 virtually closed off membership of the Maggior Consiglio to all but the most established of patriarchal families,making Venezia a tightly knit oligarchy until its demise. All Venetians were encouraged to spy on other Venetians in every city,port and country where the Venetian Republic had an interest,for the security of the state.Acts considered to be against the state were punished swiftly and brutally. Venezia was remarkably cosmopolitan, its commerce attracting people of all nationalities.For sheer opulence and luxury, Venezia was one of the largest cities in Europe,with an estimate population of between 150,000 and 200,000, many connected with the city’s booming mercantile activities. Visitors were astounded by its opulence and economic dynamism.But even as her people wallowed in their well-being, Venezia was on the wane.Both the Turks and the Vatican States made gains at the Republic’s expense during the 16th and 17th centuries, and in 1669 Venezia lost Crete to the Turks after a 25 year battle:its last stronghold in the Mediterraneo was gone. Finally, in 1797 the Maggior Consiglio abolished the costitution and opened the city’s gates to Napolen,who in turn handed Venezia to the Austrians….but this is another story…. Today the Venezia’s modest permanent population is swollen by up to 25 million visitors every year,the majority of them day-trippers.